In a mere 100 years, the Western world has, with much skill but little foresight, managed to create a society built almost entirely on a finite source of cheap, dirty energy. We are consuming the equivalent of millions of years' worth of solar energy captured by ancient microorganisms and plants, and locked up in vast oil, gas and coal reserves at rates so high that we will probably have no economically recoverable deposits of oil and gas left by 2050(1). This situation is compounded by our dependence on foreign oil and an increasing number of environmental concerns(2). Inevitably, we must solve our energy problems in ways that are both profitable and environmentally aware.

It is clear that we must use a multi-pronged approach, including innovation in technology and fundamental changes in our daily actions. Without changing how and what we grow as food, how we transport ourselves, package our goods or build our homes, we will not become sustainable. The world has, after all, become quite flat(3), and so our solutions must by implication involve all levels of industry, society and government. The human race must evolve in the socio-political and moral landscape: indeed, we must undergo a global transformation. In this series of articles, I will explore the state of current energy technology innovation and how they will come to shape our future world.

It is astounding to realize that 35% of global energy is currently obtained from oil exported from politically unstable regions, that we, in the developed world, thereby fund repressive regimes, steeped in corruption and armed conflict(4). The US currently imports 60% of its oil. Of approximately 20 million barrels used in the U.S. per day, 9 million are used for passenger vehicle fuel and 3 million for diesel fueled trucks and buses(5). Worldwide, consumption of foreign (i.e. Middle Eastern) oil amounts to nearly 60 million barrels per day. To compound the political implications of this, most scientists now agree that the unusual changes in planetary climate are the direct result of greenhouse gases added to the atmosphere, mainly from the combustion of fossil fuel. Paradoxically, while R&D investment has increased in almost all other industry sectors worldwide, it has steadily declined in the energy R&D sector since the 1970 global oil crisis, with the sole exception of Japan (Figure 1).

Despite sharp declines since the 1980s, the bulk of energy R&D is also still focused on nuclear energy; specifically, nuclear support technologies such as nuclear safety, decommissioning of nuclear reactors, and fissile materials control (Figure 2). Nuclear power is again being proposed as a candidate for highly energy intensive extraction of oil from sand and limestone deposits in Canada's Northeastern Alberta(7). It appears that nuclear energy is here to stay, although significant, unquantifiable risks may be associated with its continued use. The oil sands industry, incidentally, is and will continue to be the single biggest emitter of greenhouse gases in Canada. A recently formed consortium of companies called GeoPower in the Oil Sands (GeoPOS) will test the feasibility of using safer, more sustainable geothermal energy for the extraction of oil-bound in sand and limestone(8).

While planetary coal reserves are estimated to last for at least another 200 -300 years, investment in clean coal technologies by the developed world has sharply declined (Figure 2) since peak levels in 1980(2). Global energy R&D expenditures by developing countries, aimed at addressing the needs of developing nations, are probably miniscule(2). Developing nations, including China, will continue to rely predominantly on coal for at least the next 20-30 years, as it has proven recoverable coal reserves which amount to approximately 114.5 billion tons, third in the world(5). It is therefore good news that some developing countries are indeed investing in their own energy R&D, to the tune of nearly 3.1 billion U.S$ for China in 2000 and close to 1 billion for India between 1996-1997(9,10), and this is expected to rise.

Meanwhile, energy conservation R&D has almost quadrupled in the last 30 years, with Japan and the U.S. leading the way. Indeed, Japan invests heavily in renewable energy technologies, including government-sponsored Sunshine and New Sunshine Initiatives, and as a result, currently the country accounts for 40% of all global photovoltaic production. This parallels energy trends in other countries of the European Union, for example, Germany, which has recently become a world leader in wind energy systems(2). The E.U. through its Framework Programmes for Research and Development is also investing increasing amounts in R&D related to renewable fuels, including hydrogen and cellulosic ethanol, corn-derived ethanol, production of bio-diesel fuel from a variety of plant organic fats and oils, and gasification-pyrolysis systems, approximately Euro890 million for the latter and Euro670 million for sustainable surface transportation. Canada has the potential to become a leader in wood waste to energy systems, given its large forest products industry, and is a world leader in many fuel cell technologies, with over $200 million invested annually, mostly from private companies(11).

There are, however, significant barriers to the efficient deployment and market penetration of new, sustainable energy technologies, including high cost, information dissemination, and adequate financing. But "slow capital stock turnover", or SCST, and infrastructure modifications(2) are probably two most detrimental aspects to the immediate adoption of new energy technologies. SCST relates to the typically long life span, between 15 for automobiles and 50 years for power plants, of older technologies. And so, unless there is a mandated phase out of these old systems, such as the recent U.S. Clean Air Act to replace dirty coal fired power plants or Japanese Shaken to limit the age of cars on the road, there will be significant lag period between the development of new energy technologies and their full scale commercialization and adoption in every day life. The same problem comes to the fore when significant changes to energy infrastructure are required prior to the large scale installation of a new technology: think, for example, of the specialized storage and distribution systems for hydrogen based technologies(12).

On this basis, it is clear that even with accelerated rates of investment in energy R&D, we should be focusing on mitigating greenhouse gas emissions, and reducing energy use through simple conservation coupled to the modification of existing energy technologies to perform cleaner and more efficiently during the current 20-50 year lag period, prior to full scale transitioning to new energy technologies. Perhaps ironically, developing countries may actually be in a position to transition to sustainable energy technologies faster than we are, because they lack a complex, entangled energy infrastructure. In any case, such a transition may be only feasible with our substantial assistance and technical support.

In the next articles in this series, I will examine emerging energy technologies, specifically, nanotechnology, the new Cleantech, and what role it will play during the next few decades, where we will need to improve old technologies in transportation, energy generation, and construction. And later, I will turn my attention to the advances in carbon sequestration and renewable fuels production. Could it be that a few decades from now, we will be employing methods used by our distant ancestors dwelling in the Amazonian forests nearly 7000 years ago as a matter of routine? Will we finally see the bigger picture, connect the dots, and evolve?

"....the best way to learn about a complex system is by poking and prodding it. Indeed, that might be the only way to truly internalize something really complex: You have to experience it for yourself. " Clive Thompson

What would it take to reduce U.S. dependence on foreign oil? In this simulation, you are elected President of the United States on a platform of reducing U.S. dependence on oil imports. How will you achieve your goals? http://forio.com/resources/us-oil-policy-simulation/ 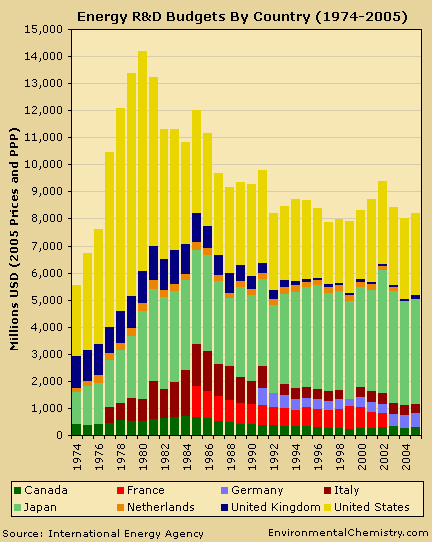 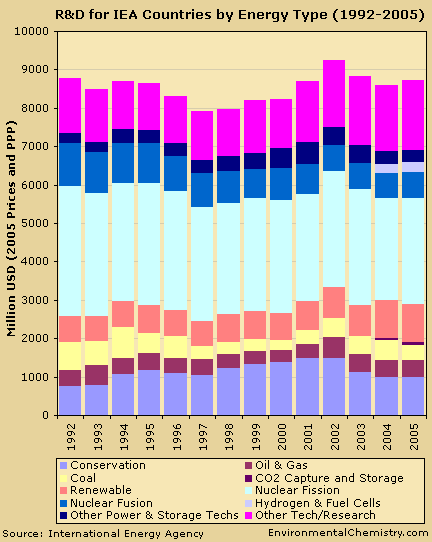 Discuss this article on our official blog

If you need to cite this page, you can copy this text:

Linking to this page

If you would like to link to this page from your website, blog, etc., copy and paste this link code (in red) and modify it to suit your needs:

<a href="https://EnvironmentalChemistry.com/yogi/environmental/200706energyinnovation.html">echo Global Trends in Energy Technology Innovation (EnvironmentalChemistry.com)</a>- In a mere 100 years we have consumed the equivalent of millions of years' of years' worth of solar energy captured by ancient microorganisms and plants, and locked up in vast oil, gas and coal reserves which are being rapidly depleted. Inevitably, we must solve our energy problems in ways that are both profitable and environmentally aware.
.

NOTICE: While linking to articles is encouraged, OUR ARTICLES MAY NOT BE COPIED TO OR REPUBLISHED ON ANOTHER WEBSITE UNDER ANY CIRCUMSTANCES.

PLEASE, if you like an article we published simply link to it on our website do not republish it.